The CPM project management schedule is a dynamic and effective tool used by project planners and managers to design and implement a project under limited time resources. It is always customary and has a normal logic of defining the project’s duration.

The schedule also assists the managers to force order in the activities of the project and bring the ballooning cost under control. It lets the managers anticipate problem areas, and allow the project team to handle unpredictable delays on the way.

In CPM Project Management, it is obvious that in almost every project, one or two activities perform slowly affecting the pace of the project. The pre-planned schedule sometimes changes midway and delays the completion date. That results in an increase in the cost of the project. But the critical path analysis of CPM helps solve the problem to a certain extent if implemented carefully with frequent analysis and intermittent project reviews.

Critical path analysis (CPA) is a technique used to track the schedule of a project under review, estimate its completion time and address problems that are responsible for delaying the project. It takes into account the entire sequence of the tasks and calculates the speed with which these tasks can perform faster.

The CPA records both start and finish dates for every activity accurately. It then helps the managers to review the duration’s of the remaining tasks in light of the work accomplished and resources used for the completed work. Revised duration’s and resources are then entered into the schedule forcing the longest or critical path forward.

The following CPM diagram of a month-long duration project gives us an idea of this critical path methodology on how to analyze a project using CPA. 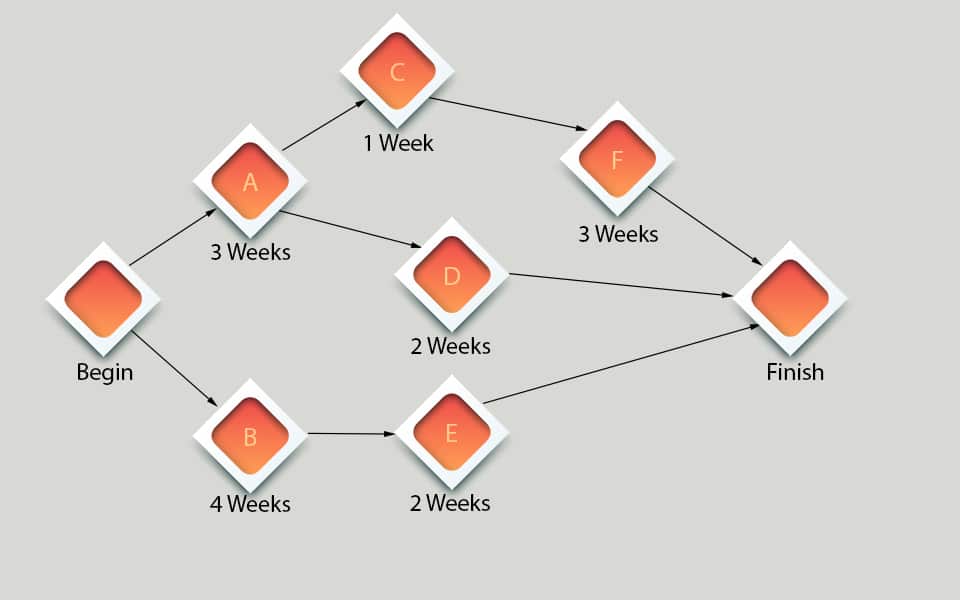 The CPM diagram here gives us a fair idea of how to analyze the project. There are two sets of activities here – (1) important, and (2) subsidiary. The chart marks out these tasks, which are part of the project, in alphabetical listing of circles. It is expected that every task is to be completed in the allotted duration.

The activities under A,C and F are dependent upon each other and are vital to complete the project on time. It is the longest path, which begins with the start of the project and ends at the project completion date. Sum of the duration of every task lying on this path becomes the project duration itself. Hence, the activities pertaining to these tasks have to be completed in less time than the tasks marked B, D and E which are subsidiary tasks and are not entirely dependent upon the completion of A, C or F.

These three activities of the project are slack or float. That means they have flexible time schedule, which rarely affects the end date of the project. That way the route belonging to the tasks A,C, and F are critical and form the critical path of the project. All the activities from this path have to be treated with care and kept under focus all the time.

Let us assume that the project is analyzed midway stage after beginning the project. Let us also assume that the task C is delayed by a couple of days due to the absence of resources or due to some unforeseen natural disaster. This delay will invariably push the interdependent task F, and perhaps D, further by two more days. That means the finishing date of the entire project will be four days later than the original schedule, since C belongs to the critical path. The cost of the project therefore will also increase.

This delay will obviously reflect along the entire critical path of the CPM chart when the project is reviewed, scrutinized carefully and analyzed midway, forcing the manager to take quick action. He may then manage a few more resources, add a couple of more tasks in addition to A, C and F or employ additional personnel to complete the tasks and accelerate the process to bring down the loss of four days by at least a couple of days in the project schedule.

It is possible if we use the CPM scheduling and CPA analysis of the ongoing project. The CPM schedule discussed here is just an example. Many more problems can be addressed and solved using the CPA technique in a long duration, multi tasked project.